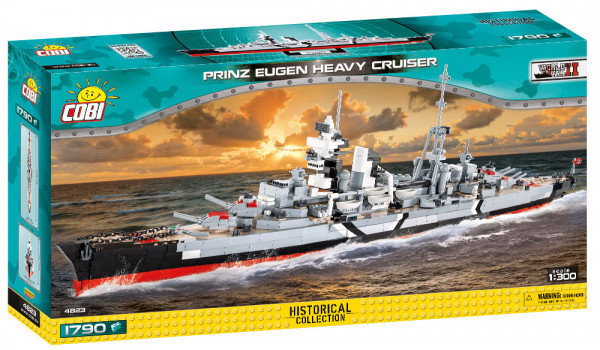 Prinz Eugen entered service in 1940 and was the only major German ship to survive the war, but ultimately met a surprising end. In May 1941 she accompanied the battleship Bismarck on Operation Rheinübung, during which she battled the British ships Hood and Prince of Wales, sinking the former. Damaged by the Prince of Wales, she underwent a renovation, during which the Prinz Eugen was bombed by the Allies.

In February 1942, together with the battleships Scharnhorst and Gneisenau, she participated in Operation Cerberus, which was designed to take large Kriegsmarine ships from France to Germany. From 1942 to 1943 she served mainly in the Baltic Sea as a school ship. From October 1944 to April 1945 she supported German troops fighting in Kurlandia and then East Prussia. On the 8th of April, 1945, Prinz Eugen sailed to Copenhagen, where she was transferred to the British in May 1945.

In December 1945, the ship was taken over by the Americans, who in 1946 used the cruiser for nuclear weapons tests at Bikini Atoll. The ship suffered only minor damage, was later towed away and sank. Today it rests partially sunk on Kwajalein Atoll. From the COBI building block set you can build a model of the famous heavy German cruiser Prinz Eugen.

The model was designed on a model scale of 1:300. The set consists of 1785 blocks and provides many hours of exciting construction and fun. The high-quality prints, applied with precision, reproduce the painting of the hull and details of the ship during World War II. Prints don't smear or scratch even in intense play. Once built, the realistic-looking ship can be attached to the display stand included in the set. The set also includes a brick plate with the ship's name and scale. Many of the components are movable (rotating cannons, movable barrels and ship cranes). The advanced and exclusive set is sure to please young and old fans of naval history, engineering and modeling.