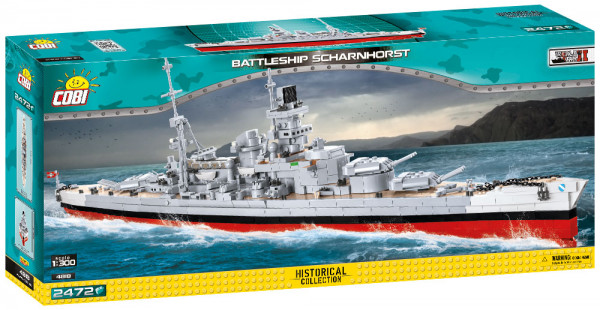 The Battleship Scharnhorst was a German battleship of World War II, commissioned on January 7th, 1939. Both Scharnhorst and Gneisenau were a new type of German battleship. They were characterized by a larger size, greater speed and more powerful weapons. They were created in response to the expansion of the French naval fleet. Scharnhorst took part in many combat operations in which the battleship showed its effectiveness. She was sunk at the Battle of the Northern Cape on December 26th, 1943.

The COBI battleship brick model was manufactured by COBI at a scale of 1:300. It consists of 2472 elements and is an impressive 80 cm or 31 inches long. It faithfully captures the proportions of the historic ship and retains all its essential elements, including armament. The ship has been covered with high-quality prints that don't smudge or scratch even during intense play. Noteworthy is the intricately reproduced hull shape, new dark chains and anchors, and an improved war flag pattern. The model has numerous moving parts such as propellers, rudders, rotating turrets and gun barrels that can be raised and lowered.

The kit also includes a very stable and aesthetic black display stand with a plate on which the ship's name is printed. Since it is a large and quite complex model, we recommend it mainly to veteran collectors and older, experienced fans of bricks. It does not require gluing or painting, because its entire body and all the elements consist of building blocks. The ship is the perfect gift idea for fans of military and nautical design. When assembled, the COBI Scharnhorst looks extremely aesthetically pleasing and majestic. It attracts attention and will certainly become an ornament of the collector's living room or office.